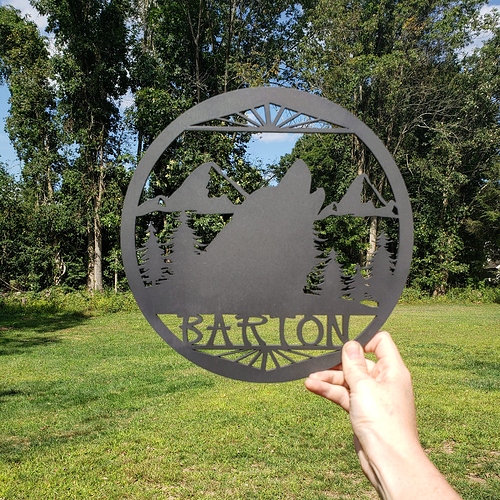 Before my little girl was born, we chose wolf for her bedroom theme. I created the SVG with trees, mountains and a wolf to give a nature feel. Leaving the wolf to symbolize strength, leadership, and beauty.

My first step was to add a last name. I used Silhouette Studio Designer Edition software to type the name. Then sent it into Glowforge app top upload.

I loaded 1/8" Baltic Birch into the tray, pinned it down with honeycomb pins and watched the laser GO!

After the cut was complete, I used charcoal spray paint. I chose not to because it’s for indoor design.

We’re enjoying these chilly nights outside, looking at the stars, then going into bed with a beautiful reminder to stay strong.

Love it! I’m very tempted to get myself a Glowforge

I love mine! It feels like I can bring ideas to life.

Let me know if you have any questions.

I’ve been looking for a Laser engraver/cutter for years. I still have the Aztec Calendar I got as a sample from Epilog Laser many years ago… I looked at a K40 but too much work even for a hobbyist like me. The Glowforge looks pretty easy to use, the pro with its pass-through doors is a great update that the big boys have. I found the Oku Desk on Kickstarter and am backing them. Less than 1/2 the price so I hope it gets fully funded.

I haven’t heard of that one yet!

I have heard people say Glowforge is user friendly, but that other lasers are high quality. I have the Pro, but haven’t tried the pro slot yet.

I’d say getting your money back is easy. It certainly pays for itself. I have a vinyl cutter and Sublimation printer… but Glowforge has something so satisfying and addictive.

[Nomad Technologies S.L. They are out of Spain, they build/sell large CNC machines and sell DIY lasers.

The smaller ones all look like they need better air assist, to help with the cutting and cut down on the burn. I’ve been in the laser groups on FB for a few years now.

Wondering, Are they available for USA?

I have an inline fan for Glowforge. It gets more smoke out and sounds quiet. Regular fans sound like an alien invasion.

I sent a few texts back and forth this morning while at work so It was quick. they will ship to the states. I don’t know how their filters work at all, where they connect, the speed or noise produced.
I would look at adding either a second fan, to blow on the cut area, on the diode head itself 3D printing a mount and running a 12volt line to a power source. or putting in a compressed air line like the big boys have.

It looks like they were trying out the KS platform to see its ins and outs. They told me they will continue to improve their machine and re-launch in 2021.

I’m going to send them an email later. See where they are going, what improvements they have planned, and what they can do for me. they have it listed on-site for 1599.00 euros.

I’d like to see it get a 16" x 20" work area( the size of 1/4 sheet of mat board) a pass-through like the Glowforge and the big boys. LED lights are something I can again add with an external power source, a camera would be nice but an added expense they might not need having to program more software. I’d rather have an off-line version of the software so if they go belly up I can run it without their back-end server software.
nomadtech.es it is in Spanish so get your google translate loaded up.

They canceled the Kickstarter campaign, their management company partner let them down big time. I think I posted more social media posts then that company did…
They sent out an apology message and said they will still honor the prices online and will relaunch in 2021. I’m waiting for a response from them on what updates they might want to implement before I commit to the current option. which still looks good.