Variable Fonts, I need help with them

Ok so I just purchased a new font family, the Paradise Point font family, I’m confused about the use of the TTF
fonts; Paradise Point Inline Variable and Paradise Point Variable?
How do I use those? Should I be using them? They don’t look to show up correctly in Corel Photo-Paint 2019 nor CorelDraw 2019. Just some generic-looking sans serif font. Does anyone have any knowledge of how to use this variable font?

I contacted MyFonts where I bought it but they sent some sort of canned response about how font families show up under software, the different styles, and such under the main/base font name.

Thank you for contacting us.

The font is correct, its the Window system you are please let me explain:

Fonts are displayed in two fashions:
either as single, individual fonts, or in families. A single individual display would list each of the fonts you purchased just as that ~ individually. This is beneficial so you can see specifically what fonts are available. You avoid accidentally selecting to ‘bold’ or ‘italicize’ a font if it’s not a selectable option.

With the ‘family’ version the base font of each ‘family’ is displayed (usually the roman) and the bold, italic, and Bold italic has to be ‘applied’ by using the ‘B’ button (Bold), ‘I’ button (Italic) Or both ‘B’ & ‘I’ (Bold Italic). This may vary slightly depending on the application in use.

Additional information on applying font attributes (bold, italic, bold italic) should be available in the Help menu of the application you’re using.

Let us know if you have any other questions. Thanks for using MyFonts!

I’m going to send them another request for help, but I thought someone here might know about this and someone else might run into this problem.

photos of the TTF and OTF fonts 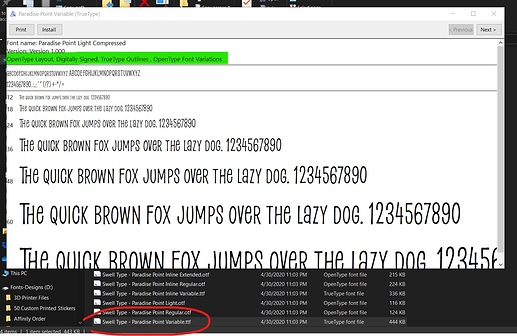 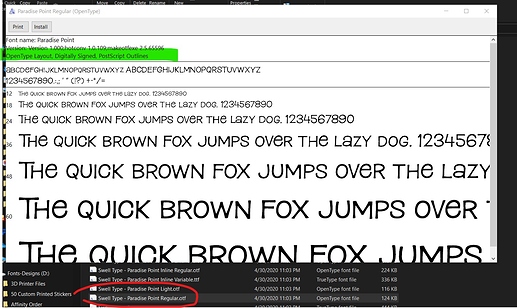 The term variable might be a mistake translation of variations?

I agree with CleanCutCreative, though I’m not entirely sure I understand the question. I don’t know this font specifically, but in general you might use a basic font, and then select certain letters to apply alternate characters to, so it looks more decorative. Other times and an entire ‘font’ of alternates is usable on its own because it looks good that way.

Some fonts have alternate characters as a separate font type that shows up on your software. With others, you have to navigate to find them. Typically on the Windows Character Map it would be around Unicode > Unicode Subrange > Private Use Characters.

I know full character sets including alternate characters won’t show up on all software, but they do on some programs. For instance, I go into illustrator to copy them to bring them over into Photoshop CS5 when I use it. It’s possible there are alternates you can’t see in Corel Photo-Paint or Corel Draw, but I don’t know - you might have access to all of them. I usually use OTFs so I can’t tell you if TTFs display particularly differently, but usually that’s how you find the alternates.

Some fonts are stackable (like ones that have outlines and inner sections separately, and you can duplicate a layer and apply the outline to the one above etc), but that doesn’t seem to be the case with this font.

[Edit] Reading back over your post, it sounds like the variable font changes maybe to match the other letters it’s paired with to create a more natural/varied effect. I don’t know how to use it beyond the usual, but there’s information about variable fonts online. 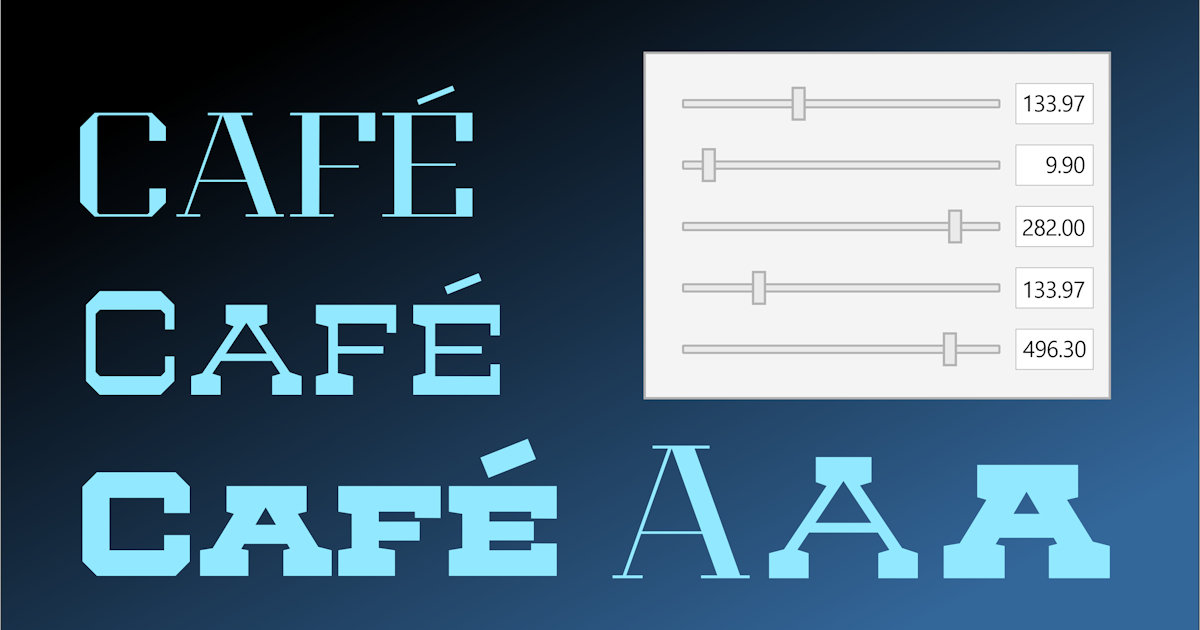 Learn how to use CorelDRAW’s new variable fonts to fine-tune the look of text by changing font properties such as width, slant, weight and more.

If it’s a new feature (to work with Variable fonts), the software you have mightn’t have it.

I’ll have to check if Affinity applications support Variable Fonts.~~That is a Big NO.

Hello Joseph,
I just wanted to add my two cents to see if I could help…
I think they are referring to ‘variable’ as in variable fonts. This is the latest specification of the Opentype format (version 1.8), released in 2016. The goal of this format, and variable fonts in general, is to let the user define the appearance of the typeface through parameters you can play with. Traditionally, these could be width, weight, etc. So rather than having Light, Regular, Bold, etc, you have a single file that covers these aspects. As a user, you can then modify the parameters in your software.
I am not very up to date on Corel Draw, but the latest Adobe software, features panels were you can modify the typeface as you wish. So you can decide how bold or expanded it will be.
I am personally not convinced by the solution, among other things because of the confusion it gives type users who may not understand or have the software to modify the parameters. This format was developed by Apple, Adobe, Google and Microsoft, so they are all pushing quite hard to get it applied…
Check with your latest version of Corel if you have any ‘Variable fonts’ options. You should then be able to modify the single typeface you see into all the other possibilities.
Many foundries offer variable fonts as a bonus to their regular fonts. So if you are having issues, you could maybe check with Myfonts to see if you can swap your single variable font into the various weights (or styles) you are looking for…
Hope it helps,
Kind regards,
Michael

Thanks, Michael. I’ve read this article about them several times, I haven’t found much information on what MS applications support it or not. I have Office 365 but haven’t noticed it…I’ll keep on looking.

I’m formatting C tomorrow and will be installing CorelDRAW 2020 and the newest Affinity releases, although they when last checked did not support variable fonts. I’d rather see the support of Color Fonts in more apps. I did not back CorelDRAW for another update after 2020 because of poor customer support, an awful font manager, and no Color Font support in the foreseeable future. I will replace The 2020 Font Manager with Main-Type I have it already installed, I’d just like to see it have a dark mode.

Everything should have a dark-mode my eyes would be happier that way. (that reminds me where is the dark theme for the forums at!?!)